Chef Tanya Holland is beginning to build an empire here in the Bay Area. I have had the pleasure to meet Chef Holland at a couple of events where she has openly shared her experience and struggles not only as a female chef, but as a Black chef.

She started Brown Sugar Kitchen over ten years ago in a flatiron building in West Oakland that was mostly industrial at the time. West Oakland was not her first choice for a location, but she was denied rental opportunities in more “attractive” parts of the City. Chef Holland persevered and people came to West Oakland and waited in line for two hours for her signature fried chicken and waffles. She closed her popular restaurant last year, which surprised a lot of us.

2019 is the year of Chef Holland and Brown Sugar Kitchen. She recently opened a Brown Sugar Kitchen in the Ferry Building in San Francisco, one in Uptown Oakland last week, and soon will open at the Oakland Airport. And it’s only February.

I had “brunch” with some colleagues on opening day of the Uptown Oakland branch since it’s walking distance from the office. I wasn’t sure what kind of lines to expect at 11am on a weekday, but surprisingly we were seated right away in the beautiful dining room.

I think our party of five had FOMO and all ordered the buttermilk fried chicken and cornmeal waffles which come with brown sugar butter and apple cider syrup. The fried chicken was well seasoned, crispy, and juicy like you can find at many other restaurants these days. The waffles though. You can’t get waffles like these. The cornmeal not only brings a delicious and distinct flavor, but it adds the crisp texture that is hard to achieve. The butter and syrup balances the dish off.

Chef Holland is not only a celebrity around Oakland, but has become well known around the Country, especially after she participated as a contestant on Bravo’s Top Chef Season 15. She’s doing a lot of great things and I look forward to watching her continued success! 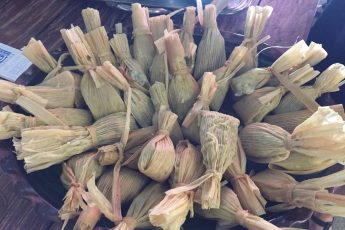 An Evening with the People's Kitchen Collective