Last Monday, I went to Reem’s in Oakland for dinner. Reem’s is not open on Mondays nor are they open for dinner, but they were hosting a pop-up dinner.  The event was called Azoumeh which means dinner party in Arabic.

As my friends and I arrived, we sat at one of the long tables that was set up family style that would each accommodate about six to eight people.  Snacks were already on the tables.  I took it as customary to be served coffee when you arrived, as the staff came around to serve Arabic coffee in these beautiful miniature ceramic cups.

There was a large bowl of “habet al ruman” which is a dip made from eggplant, lentils, and pomegranate molasses.  I kept scooping up the sweet emulsified dip with the fresh pita that I assume was Reem’s contribution.  It was addicting!

There was also a plate of pickled vegetables to nibble on while we waited for more guests to arrive and the main dish to be served.  This included carrots, cucumbers, olives, cauliflower, and chili peppers.

Mohammad Abutahah, the chef responsible for the Arab dinner came out and introduced himself and provided a little history of the pop-up and the meaning behind the food.  The “Azoumeh” is a special occasion dinner that brings people together.

He then introduced his friend Samer Irani who he described as the “kabsa whisperer.”  Kabsa was the main dish we were about to partake in.  This dish originated in Yemen, but spread throughout the Middle East.  Now that the dish has been brought to Reem’s, he recommended eating it with Sriracha sauce if you wanted some heat.

The huge tray of kabsa looked amazing.  The dish of rice, chicken, onions, almonds, and raisins was flavored with saffron, cardamom, cloves and other aromatic spices.  I used the dakoos, tomato salsa, as well as Sriracha sauce to combine all the flavors.  The rice was separate and fluffy – perfectly cooked.  There was so much food that we all got to take some kabsa home.  It made for a nice lunch.

The kabsa was complemented with a traditional Arabic salad of red cabbage, cucumbers, and tomatoes.  It was refreshing and the crunch added a nice texture.

For dessert, we had warbat big ishta which is crisp phyllo dough stuffed with clotted cream and soaked in rosewater syrup.  This and some Arabic mint tea was the perfect way to end the family meal with old and new friends.

It was altogether a wonderful experience – the food, the company, and the traditions.  I felt like I was at a party in someone’s home.  We also received a parting gift of biscuits flavored with star anise. If you are interested in experiencing an “azoumeh,” another one is happening on Monday, March 18. For tickets, click this link. 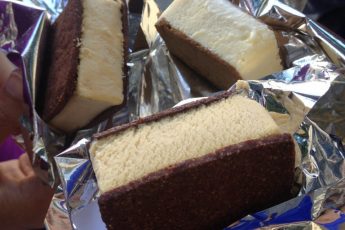 Ode to the Ice Cream Sandwich 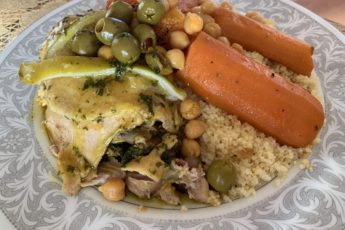 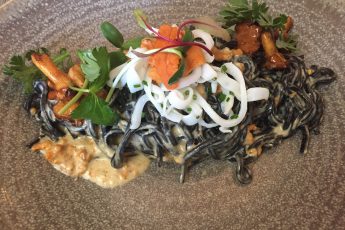