I have definitely purchased coupons from Groupon, Living Social, and restaurant.com to get discounts for restaurants.

My friend recently invited me to have dinner at The Bay Leaf Restaurant in Oakland so she could use her Living Social coupon. She paid $26 for the voucher which was redeemable for two non-alcoholic beverages, one appetizer, two entrees with two sides each, and one dessert. I didn’t have dinner plans, so we were off.

Bay Leaf is located in the Diamond/Fruitvale district in Oakland serving up Southern food reminiscent of the Southern Cafe that used to be at this exact location. I don’t know what the yelpers were talking about in regards to service. Our waitress was very nice.

My friend who recently has spent a lot of time in the South loves her some sweet tea. She unfortunately didn’t think it was comparable to the sweet tea in the South. I went with the 50/50 which is their version of the Arnold Palmer. Half lemonade and half sweet tea. I thought it was okay as well. It was nice that it came with our meal.

We had been debating a bit over the appetizer. The waitress told us the fried okra was very popular, but one of her favorites were some fried red potatoes that were new to the menu. Not being a fan of okra (I find it slimy), we decided we would go with our waitresses’ suggestion. The potatoes had melted cheese and chives and came with ranch dressing. I thought it was pretty good and ate my share. 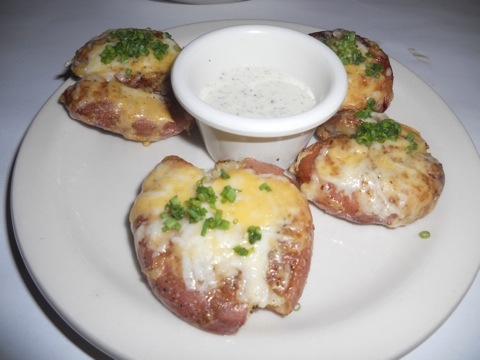 My friend ordered the oxtail with rice and chose yams and collard greens as her sides. The meat from the oxtail was quite tender and tasty. The sides were also nice. Both our plates came with corn bread muffins. These were some of the best corn bread I have had.

I ordered the fried chicken wings for my entree and selected mac and cheese and green beans with bacon as my sides. The chicken was juicy and well seasoned. The texture of the batter was a bit crumbly, which did not allow for the crisp that I like. The mac and cheese was simple. I liked how they used penne pasta. The stand out were the green beans. Cooking it with bacon definitely stepped it up many notches.

We still had to choose a dessert. I would have a bite, but leave it up to my friend to choose something. She ordered the peach cobbler a la mode. The texture of the crust was soft and moist, a lot different than I’m used to. Again, it was nice that it was included in our meal.

Overall, I thought the meal was good with several items that stood out as great. The prices are very reasonable, especially with a coupon. The coupon is there so as a new customer, you would give it a try. The restaurant would hope you would return. If I’m in the mood for Southern food, I would definitely return to The Bay Leaf Restaurant. By the way, if you think you have an expired Groupon or Living Social voucher, you may not be able to get the full value of the coupon, but you should be able to get the value that you paid. For instance, if this coupon expired, we could’ve gotten $26 worth of food instead of the over $50 we did get!