The Duck Club: As Fancy as it Sounds

Inside the plush Lafayette Park Hotel and Spa, you will find the Duck Club. I met my colleagues there recently for dinner as we were prepping for a weekend program.

Prior to our appetizers coming out, the chef sent out a complimentary amuse bouche. It was a small bite of seared ahi tuna with an asparagus tip and croutons with a balsamic vinaigrette. It was a beautiful tasty surprise. 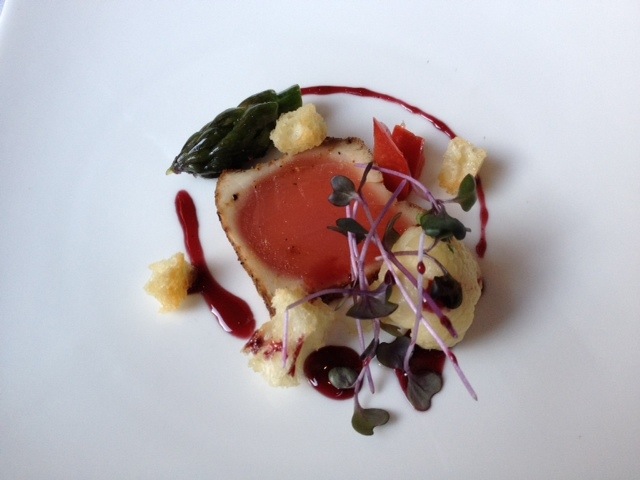 I ordered the Caesar salad which came with Spanish white anchovies. It was simple and I enjoyed it very much.

The other appetizer ordered was the seasonal soup which was tortilla soup. I was a little surprised that this was ordered, but more surprised that it was the seasonal soup. Being Spring, I didn’t understand why tortilla soup would be served this time of year. I also was surprised it would be served at this restaurant serving American cuisine. The soup did have a nice consistency with good flavors.

Two of us ordered the pressed half chicken. The chicken came with herbed roasted potatoes, asparagus, caramelized pearl onions, in a lemon pan ju. It had me at “pressed”. I imagined chicken that would be juicy with crispy skin and that is exactly what I received.

One of my colleagues ordered the local seasonal fish special. My colleague described it as “a light and delicate white fish set atop a mélange of sautéed fingerling potatoes and hearty root vegetables.” She felt that the fish balanced well with the other flavors.

My other colleague ordered the other special which was a pork loin wrapped with bacon. I had a small bite of this and it was very special. It deserves to be on their regular menu.

The desserts were nice as well. We all had tastes of a creme brûlée, a fruit crumble, a chocolate chip cookie, and sorbet. It’s always nice to end on a sweet note, but I think the food at the Duck Club deserves more praise than the desserts.

I was really impressed by the meal at the Duck Club. The quality and presentation of the food was optimal. Service was also excellent. At one point the chef came out to say hello and at anther point the manager came out to ask how everything was. The clientele at the Duck club is a little older, but don’t hate because they have good taste.

I Scream, You Scream, We All Scream For Tara's Ice Cream

Be Greek for a Day: Oakland Greek Festival

« Previous post
Homeroom: Home of Mac and Cheese
Next post »
New Orleans: In Search of the Best Beignets