The One and Only Country Bar in Oakland: Overland

The entire Bay Area is cheering on the Golden State Warriors in the NBA Finals. After all, it’s been forty years. I’ve been catching the games anywhere I can, but my favorite place to watch has been the new Overland Country Bar and Grill in Jack London Square in Oakland. It’s located in what my BFF calls the “cursed corner” on Broadway and Embarcadero. We have seen numerous places come and go.

In order to be a good place to watch sports, there has got to be plenty of televisions. Overland has got that and an area in the back with a large projector screen. Another requirement is a full bar with drink specials. Overland has got bartenders in cowboy hats with plenty of drink specials. I’ve seen $4 Jack Daniels and they’ve got a frozen margarita machine pouring out $6 cocktails. When you are watching a game for roughly three hours, you have got to have good bar food. So here I am to review their food.
I’ve been to Overland twice and here are some of the various items I have eaten with friends. Hank style fries are french fries topped with pulled pork and ghost pepper jack cheese. I was a bit intimidated by these fries, but then pleasantly surprised. The flavor of the barbecue pulled pork, the french fries, and the cheese was well balanced with sweet, salty, and a kick of spicy. I was amazed how the fries remained crispy even with the pile of goodies on top. This is a great appetizer to share. 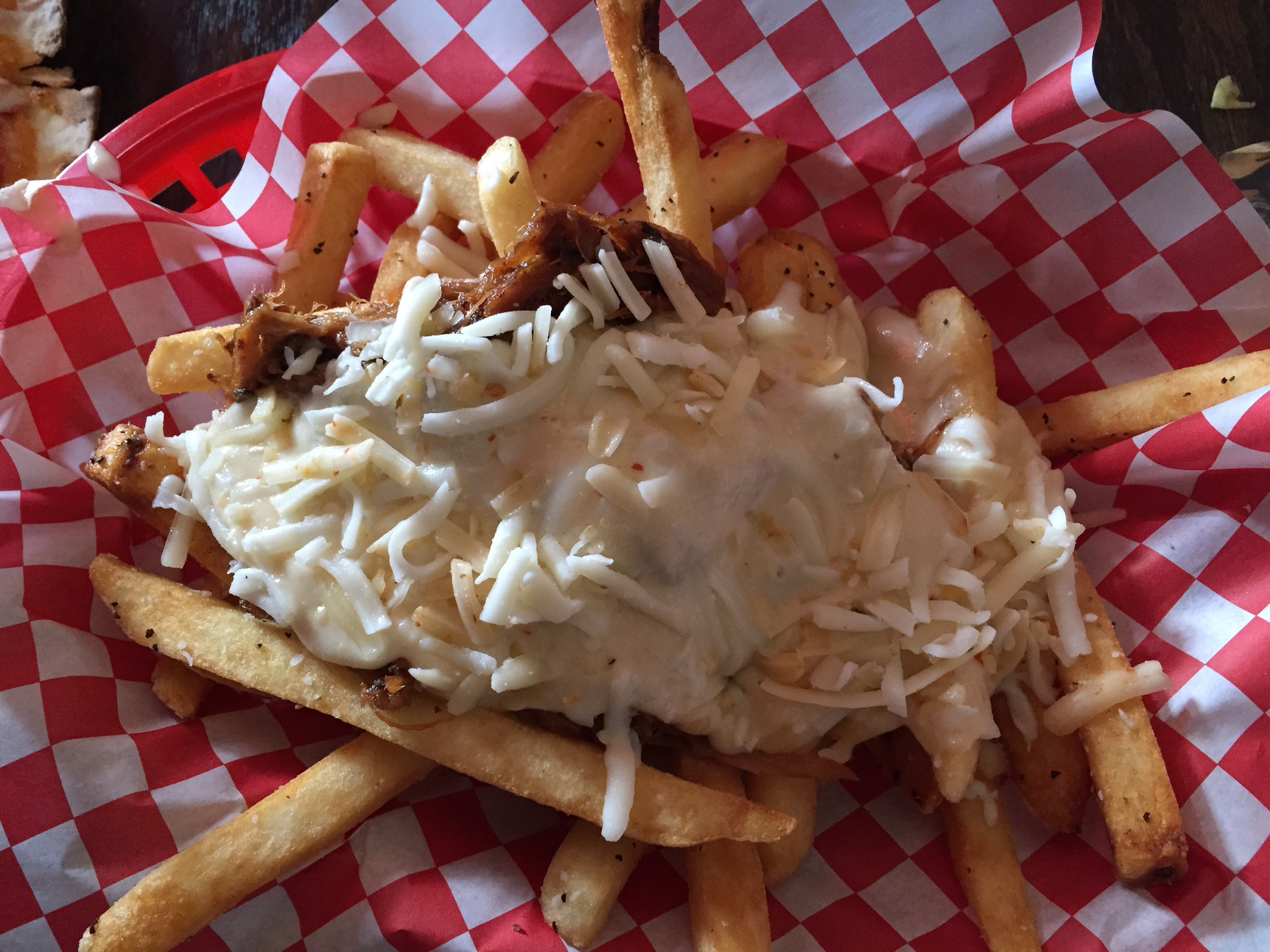 I enjoyed some fried pickles which are cut, battered, and fried. I had these on my last visit to Texas and wanted to give them a shot. These were not quite as good as the ones in Texas. I think a lot of it has to do with the cut of the pickle. The ones in Texas were sliced about an inch thick. These were cut lengthwise in spears.

Overland serves a few different pizzas. They are made in the style of St. Louis which means it is cracker thin. We shared a pepperoni pizza. Personally I was not a big fan. To me it tasted like cardboard. 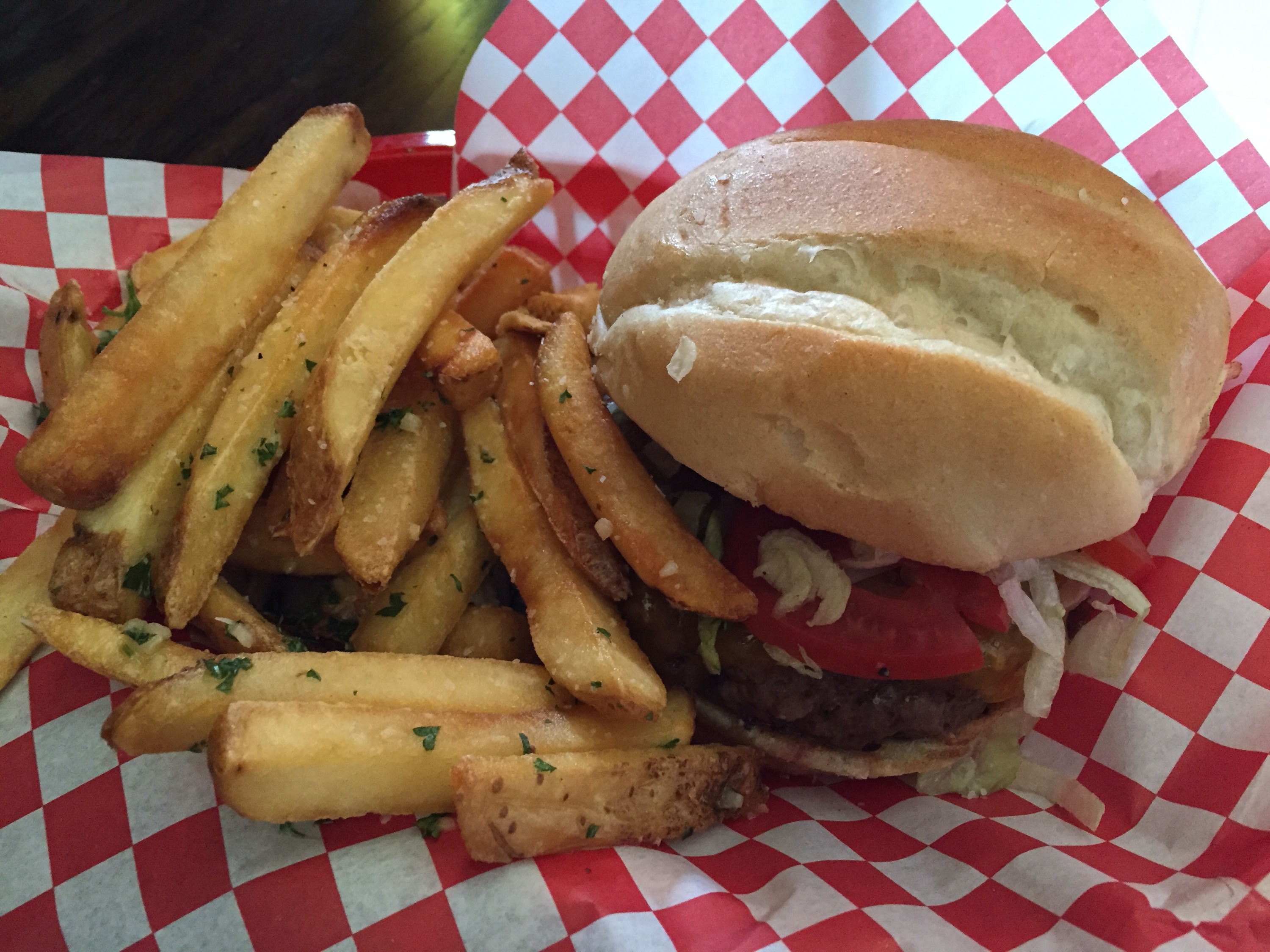 The second time I was at Overland it was Game 1 of the finals and the place was packed. I ordered a sausage sandwich which is a beef hot link served on a sweet corn hoagie. The link had been sliced in half and grilled. It came out completely burnt on the inside, but was turned over. I don’t know why I didn’t send it back. Maybe because it was so busy. I put some ketchup on it and it was definitely crispy, but surprisingly it was really tasty. I gave my BFF a bite without telling her and she really liked it.

I mentioned that Overland has a frozen margarita maker. It wasn’t functioning on my first visit, but I tried some on my second visit. They are served in cute mason jars and were delicious.

So when there are no sports to watch, Overland is a real country western bar and even has line dancing. My understanding is that on Wednesdays, it’s “wingo night” which is the night they serve chicken wings and customers can play bingo. Sounds like a good match for me. I hope Overland can stick around. If they continue improving and developing their menu, I am hopeful it might finally do away with the curse.