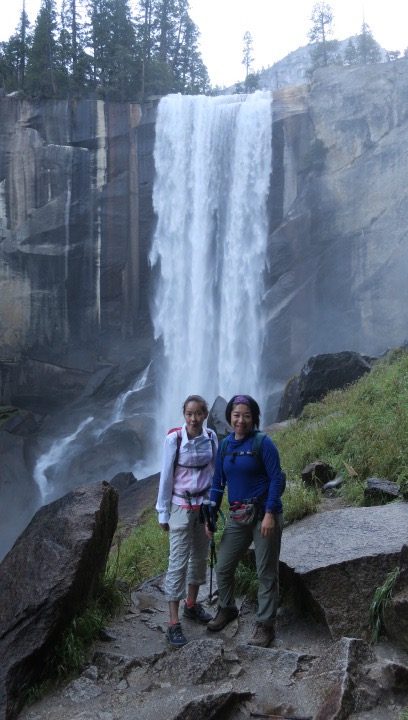 I just returned from a weekend in Yosemite National Park, a crown jewel of California. Just a four hour drive from the Bay Area, it’s another reason I love where I live.

On Thursday, my friend and I both entered the lottery to get a permit to hike Half Dome on Saturday. At midnight, I received an email indicating that I won a permit. We left Oakland before sunrise on Friday morning to head to Yosemite. We wanted to ensure we would miss traffic and be able to get in a good hike before dinner at the Majestic Hotel, formerly the Ahwahnee Hotel.

At the visitor center, we got a recommendation to hike Upper Yosemite Falls to help us get acclimated to the elevation before we set off to conquer Half Dome the next morning.

It was a pretty intense hike to get to the beautiful Yosemite Falls. We got back barely with enough time to check in to the Half Dome Village tents and make our dinner reservation.

It was actually my friend’s birthday so I treated her to dinner at the Majestic Hotel. She started her meal with the soup of the day which was a salmon and bacon chowder. The bacon infused the soup quite well and gave it a smokey flavor.

I had the Caesar salad which was probably the best prepared dish of the evening. I loved the addition of boiled egg, croutons, and anchovies to the romaine lettuce. The salad was perfectly dressed as well.

My friend ordered the prime rib which came with mashed potatoes, corn polenta, and green beans. The meat was a bit tough and came with a gelatinous gravy. We both agreed it would’ve been better with an au jus. However, the corn polenta was delicious, creamy and fluffy providing a custard like texture.

I ordered the rack of lamb. This lamb was roasted with a garlic crust. The flavor was great but was not cooked to my liking. I asked for medium rare, but it came out almost medium well.

I was disappointed in the meal compared to my last visit at the Ahwahnee several years ago.
With an early start the next morning, my friend and I got set on the trails for Half Dome at 5:30am. We reached Vernal Falls within a short time after, which was an awesome site to see.

After about six and a half hours of treacherous hiking and climbing, we finally made it to the base of Half Dome. Already fatigue, I put on my gloves to endure the steel cable climb. It actually was a lot easier than I expected. But while climbing we began to hear thunderstorms and feel some sprinkles. My friend was encouraging me to just hurry up and get it done, so we trekked up a little further. Other hikers ahead of us began to get nervous and started making their descent. We finally agreed to play it safe and climb down as well. We expected a storm that was going to be worse than the night before that included a hailstorm. Hurrying down the granite dome without a proper break to avoid the forecasted storm, I wore myself out by the time we reached Half Dome Village. I have never endured such a rigorous and physical activity. I felt like my feet were going to break at any moment.

When we got back to Half Dome Village, we were ready for dinner at Pizza Patio. We ordered the Tressider pizza which had pepperoni, sausage, bell pepper, mushrooms, olives, and tomato. The hand tossed pizza was perfect after such a long day. The pizza reminded me of Round Table Pizza, but better. I had three slices. The dough had a nice thick and chewy texture and the ingredients tasted very fresh. I would say I preferred the pizza dinner over the previous night’s dinner at The Majestic Hotel.

We slept well the second night in the tents. I’m surprised I was able to walk today, although my thighs and calves are a bit sore when I walk up or down stairs. Although I didn’t quite make it all the way to the top of the dome, I feel very accomplished. I know in my heart that if weather permitted, we would have made it to the granite peak. Nonetheless, it was an awesome experience and I can check it off my bucket list.

P.S.  I forgot to mention that we also encountered a baby bear on the hike to Half Dome!

« Previous post
Gio’s Pizza: A Revival of Giovanni’s
Next post »
Bluefin: When you can’t decide between Japanese and Thai food