I heart Santana Row in San Jose.  It’s like Disneyland for those that love to shop and eat.  The weather is generally great and reminds you that you are definitely in sunny California.  I’ve enjoyed dining in this area throughout the years –  From Pinkberry, Pluto’s, and Pizza Antica to Village California Bistro, Blowfish Sushi to Die For, and Straits Restaurant. The restaurants on Santana Row are great.

I’ve heard about Amber India for a long time and finally got a chance to try this place.   This is a high end Indian restaurant.  I was having dinner with two colleagues and the three of us each ordered a dish to share – chicken tikka masala, chili eggplant, and a lamb dish called safri gosht.  We ordered a variety of naan and rice to complement our entrees. 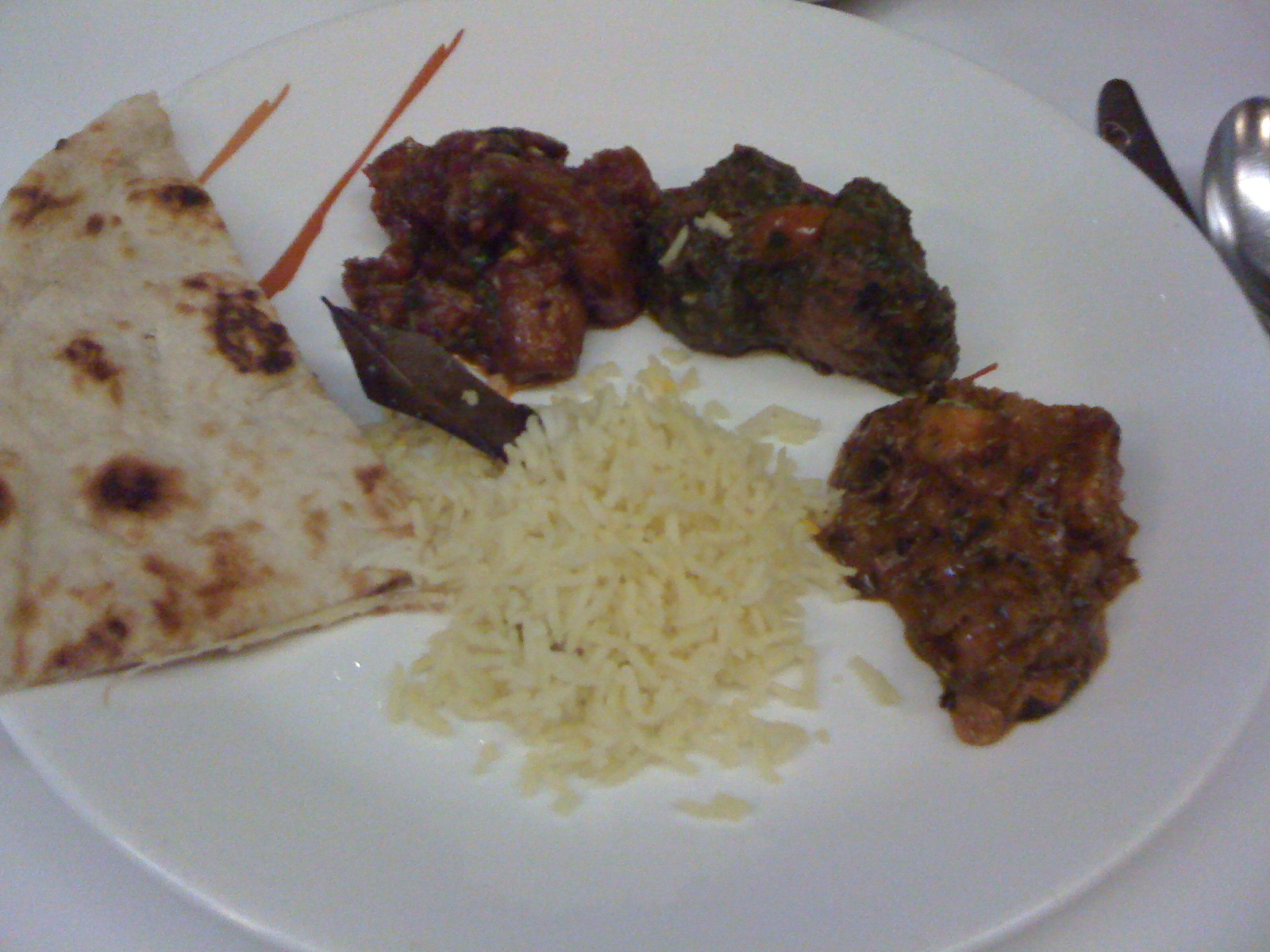 The server brought all of the dishes at once and helped plate them for us which is part of the fine dining experience (only bummer is that you don’t get to see individual photos of the entrees.)  The chicken tikka masala was good.  They used quality white meat chicken and the flavors were abundant in the chunky sauce and offered a bit of a kick.  I am used to this dish being saucier so I can dip my rice and naan in it.  I was able to spoon the chicken on top of the naan.

The chili eggplant is something unique to me for an Indian restaurant.  Although it tasted like a Szechuan dish, it was really delicious.  It appeared to have been stir fried in really hot oil, leaving a crisp and shiny skin and a soft texture inside.  This dish also had a nice kick.

I am not a big fan of lamb because of the strong flavor that it leaves in my mouth which is sometimes gamey.  We ordered safri gosht which is chunks of lamb cooked with spinach.  The spinach added a soft and delicateness to the dish.  The meat was tender as if it had been stewed for a long time.  I was pleasantly surprised with this dish.  It was amazing and one of the best lamb dishes I’ve ever had.

The rice and naan fell flat for me.  This is a bit of a surprise to me because those are staples and I expect it to be great.   I love basmati rice but this one expanded so much I think it was overcooked.  The naan on the other hand was very thin, not chewy and crispy like I hoped for.  When you leave naan on the table, that is very telling.

Amber’s dessert selection was the most expansive I’ve ever seen for Indian cuisine.  We shared an interesting crème brulee for dessert.  Amber’s version was infused with Indian coffee.  The coffee flavor was excellent.  The texture was like a pudding and overall it was a good selection.

It’s a trek to get to Amber, but worth a visit if you are in the area.  Family style is recommended.

The Best Corn on the Cob comes from Brentwood