At the height of the popularity of the television show “The Sopranos,” in 2002, I received a copy of The Sopranos Family Cookbook.  This book was compiled by the character Artie Bucco, chef of the restaurant Vesuvio that Tony Soprano would frequent.  It is based on many stories and recipes from the characters and theme is Napolitan cuisine.  In the past, I would pull a recipe here and there.  With the television series over, I left the book behind me as well.

Recently, I decided to make the dish Eggplant Parmesan and found one from this book.  I made a few small adjustments.  Instead of making my own marinara sauce, I use a jar of store bought sauce. I could make my own, but this simplifies this dish in half.  It makes it much easier to accomplish and won’t change the flavor much.  Just use one you like.  The recipe calls for only 2 ½ cups of sauce which I don’t think is enough.  I also spread out my eggplant on parchment paper during the *degorging process.

Directions:
Slice the eggplants into ¼ inch pieces.  Lay the slices on parchment paper and salt both sides.  Let the slices sit for 30 minutes.  Rinse the eggplant and pat dry.  *The degorging process draws out the moisture in the vegetables removing some of the bitter flavor.

Pour enough olive oil in a deep pan to cover about ½ inch.  Heat oil over medium heat.  Fry the slices of eggplant in batches until browned on both sides.  Drain onto paper towels.  This is really the hardest part which can be done in advance.

Bake the dish for 45 to 60 minutes.  This dish is ready when the sauce is bubbling hot and the mozzarella cheese melted.  Let cool slightly and enjoy.

I’ve made this dish twice so far and the results are in that this is the best eggplant parmesan.  Forget the restaurant and unless you have an Italian mama, DIY (do it yourself.)  Buon appetito! 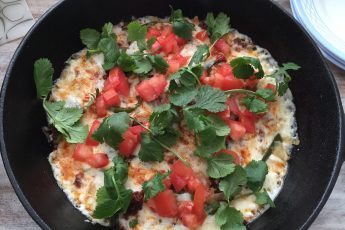