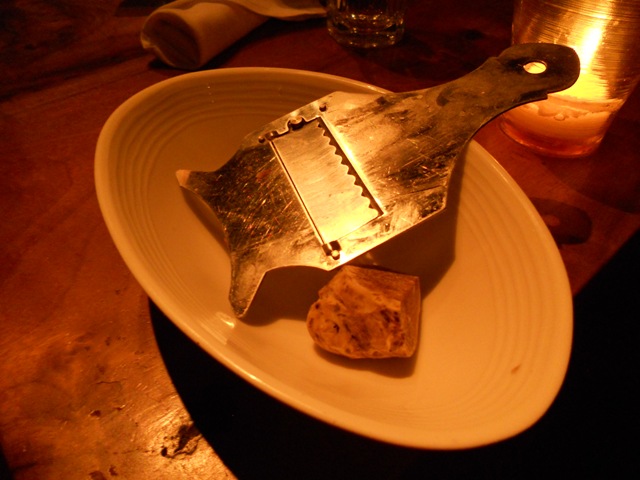 Truffles are edible fungus prized by chefs all over the world.  The largest percent of black truffles are found in France and the more cherished white truffles in Italy.  Chef David Lebowitz has a great description of truffle hunting on his blog “Living the Sweet Life in Paris.”  Living in the Bay Area, we are fortunate to be able to see truffles on local menus.  We have such great chefs/restaurateurs that are passionate about truffles, one being restaurateur Robert Klein of Oliveto.  Each year, Mr. Klein travels to Italy to hunt for truffles bringing truffle dinners to his restaurants.  My friend and I didn’t make it to one of their four evening truffle dinners at the upscale restaurant, but instead recently had dinner at the downstairs café.  The café was offering truffle pizzas.

The café is still very popular and even crowded on a stormy Saturday evening.  We had drinks at the bar before a twenty minute wait before being seated.  I enjoyed a glass of Lambrusco Rosso, Barbolini, a sparkling red wine which was the first I’ve encountered.

Before arriving at Oliveto Café, I had soup on my mind because it was a cold rainy evening.  Although I wasn’t wowed after seeing the soup on the menu, vellutata of leeks and Savoy cabbage, I still decided to order it as an appetizer.  I was definitely wowed after my first spoonful.  This creamy soup was delightful and I was pleasantly pleased.

Our first entrée we shared was the mostaccioli with beef ragu.  The baked dish looked so good that I forgot to take the photo before scooping it out.  The photo does show some reality.  This pasta was cheesy, delicious and had deep flavors.   It was another great choice for a cold raining evening.

Although my friend missed the pizza coming out and the chef shaving the truffle, it was pretty cool.  She did get to see our neighbors have some white truffle shaved on the polenta they ordered.

The flavor of the pizza was very good and the fragrance was strong and aromatic, but I was a little disappointed in the crust.  In general, I love the pizzas that come from Oliveto.  I think it was the whole-grain flour that was the disappointment. I don’t recall having pizza here before with whole-grain flour.  I felt like it didn’t crackle and bubble up as much as previous pizzas using white flour.

Mr. Klein came to the dining area to talk to our neighbors and then he came and spoke to us.  It was pretty cool that he actually sat with us and I was a bit star struck. The conversation went from how plentiful this year’s truffle season was, how he thoroughly cleans the truffles so he can easily get through customs when bringing them back, and how I didn’t like the whole-grain crust.  He was so nice that after ordering one dessert, our waitress brought us two and said they were both on the house from Mr. Klein.

We received the pain d’epices bread pudding with orange-rum caramel and the sugar pie pumpkin tart with whipped cream.  My favorite was the latter which was made of a creamy pumpkin that went well with the dense whipped cream.  Although the bread pudding had too strong of spices for my taste, the orange rum caramel was not too shabby.  It looks like we’ve confirmed what Mr. Klein said, that truffle season was plentiful this season and the restaurant will be offering their truffle pizza through the end of this week.