Beaujolais is a red wine produced in the Beaujolais region of France. It is made from the gamay grape.  Beaujolais Nouveau is bottled and released the same year of the harvest and each year it is released on the 3rd Thursday in November.  I am no wine expert, I just happened to hear about the Kermit Lynch Beaujolais Nouveau release party this past Saturday.  Having attended one of their events previously and enjoyed the food and wine, I decided to partake.

The parking lot for Acme Bread, Café Fanny, and Kermit Lynch, at the corner of San Pablo Avenue and Cedar Street turned into a party on Saturday.  A huge tent was put up, tables and chairs were set, many bottles of Beaujolais Nouveau were uncorked, and the grill was on.  Chef Christopher Lee, who previously worked in the kitchens of Chez Panisse and Eccolo, and currently part of the Pop Up General Store, and his crew were present to prepare the food.  To compliment the Beaujolais Nouveau, they served grilled boudin blanc (white sausage made of pork and chicken), homemade sauerkraut with apples, parslied creamer potatoes, and Acme baguette.  The food was delicious.

I tried one of the two Nouveau Beaujolais being offered by Kermit Lynch.  I chose the one from Cedric Vincent which a New York Times writer described as “juicy and delicious” which was actually more descriptive of my boudin blanc.  I thought the wine was good.  It tasted fruity, earthy, and young.  I bought a bottle and I hope to go along with the custom and open it up next week.  The thing is that this wine is not meant to keep.

Desserts were provided by Café Fanny.  We had shared a piece of chocolate cake with whipped cream, a salt chocolate cookie, and a lavender chocolate chip cookie.  These hit the spot to end our meal.

I had a great time hanging out with friends at this Kermit Lynch event.  If you have never been to this area, you are definitely missing out.  These events are rare, but the shops are open daily.  You can have awesome coffee and breakfast at Café Fanny, buy the best and freshest bread at Acme Bread, and get excellent wine at Kermit Lynch all in one place.

Be Greek for a Day: Oakland Greek Festival 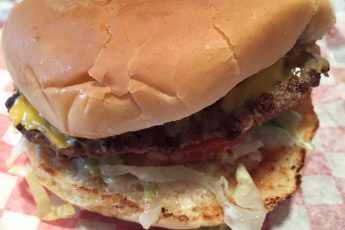 Ahn's Burger: Back in Business