The Temescal neighborhood has become one of the new “It” neighborhoods in Oakland. Growing up, all I knew about the neighborhood was going to the DMV to take my driving test. These days a lot more is happening in Temescal. They have a very successful weekly farmer’s market, more and more hipsters are moving in, and businesses are opening up and booming.

Juhu Beach Club (JBC) has been open for over a year on Telegraph Avenue in Temescal and could be called the “It” restauarant. JBC serves Indian street food with a twist and the Chef is Preeti Mistry, famous for being a contestant on Top Chef Season 6.

Last month I dined at JBC twice, once for lunch and once for dinner. I feel like after two meals, I have a good sense of their food now. Both times, Chef Mistry was behind the counter focused and calm. The first time I dined at JBC, it was dinner with my BFF. After reviewing the menu, we decided on having an assortment of appetizers to share.

The masala papadum are thin, cracker like crisps made of lentil and spices that came with four different toppings and chutneys. It was a fun appetizer to share and to munch on. 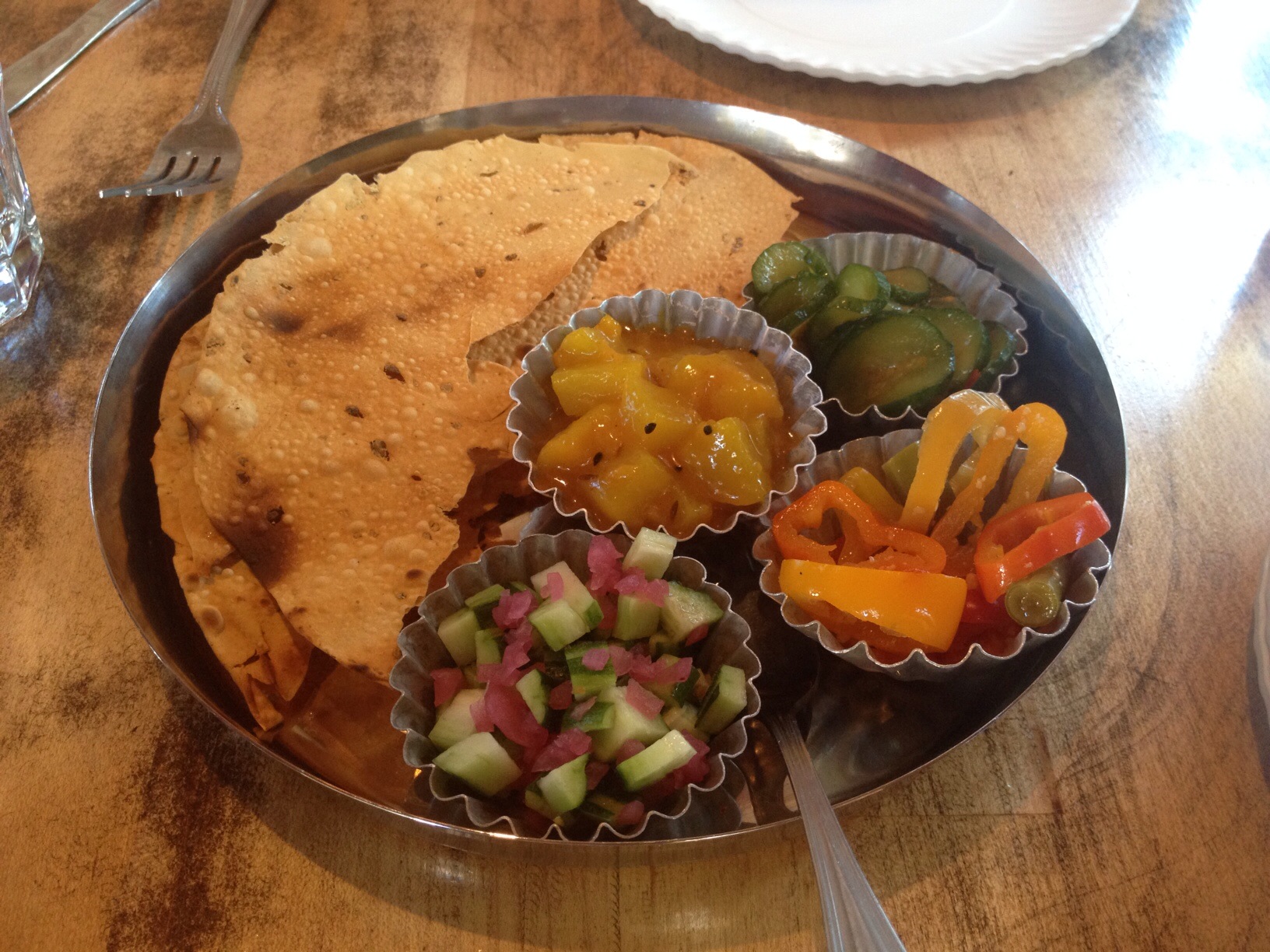 The bhel salad was a layered mixture of green garbanzo beans, cucumbers, grapes with puffed rice and sev (crunchy chickpea noodles) served in a mason jar. It had to be poured out and mixed in the bowl. I really liked the presentation of the dish and I enjoyed the texture and the flavors.

The masala fries are potato wedges with Indian spices and came with a trio of sauces. The fries were cooked nicely and my favorite of the three sauces was the tamarind ketchup which I kept going back to.

The manchurian cauliflower was cooked in a sweet and sour sauce. It was crispy and carmelized to a point where you would not know you were eating a vegetable. It was like eating candy.

The vindaloo chicken wings were prepared in a Point Reyes blue cheese raita. I was looking forward to having this version of a buffalo wing. I was a bit disappointed because it was difficult to get the meat off the bone.

We also ordered a medley of vegetables made up of corn, green beans, and onions. It was like a succotash. I felt like it needed to be eaten with rice because of the amount of butter or oil that it was cooked in. I ended up taking it home and eating it for lunch the next day and it was quite tasty.

Speaking of lunch, my lunch at JBC was with a coworker. It’s pretty clear that the item that most people eat at JBC is their pavs or sliders. The three pavs we shared were the vada pav which had fried potato puff, the holy cow which had cardamom braised short rib, and the pork vindalated, which had barbecue pulled pork. The pavs were in soft delicious rolls reminiscent of a Hawaiian roll. Surprisingly, my favorite slider was the vegetarian potato puff.

We also shared the navi Mumbai chicken salad which was made up of seasonal greens, roasted root vegetables, grilled chicken, and topped with sev. The chicken had great flavor and was delicious. This salad would hit the spot almost any day for lunch.

JBC also makes a delicious chai which my coworker ordered. I got to try it and it is the best chai I have ever tasted. If you order a chai, you get one free refill.

Overall, JBC presents Indian food with a lot of creativity. After watching “The Hundred Foot Journey,” JBC would be a great place to eat afterwards. There seems to be a similar sense of the importance of Indian spices.