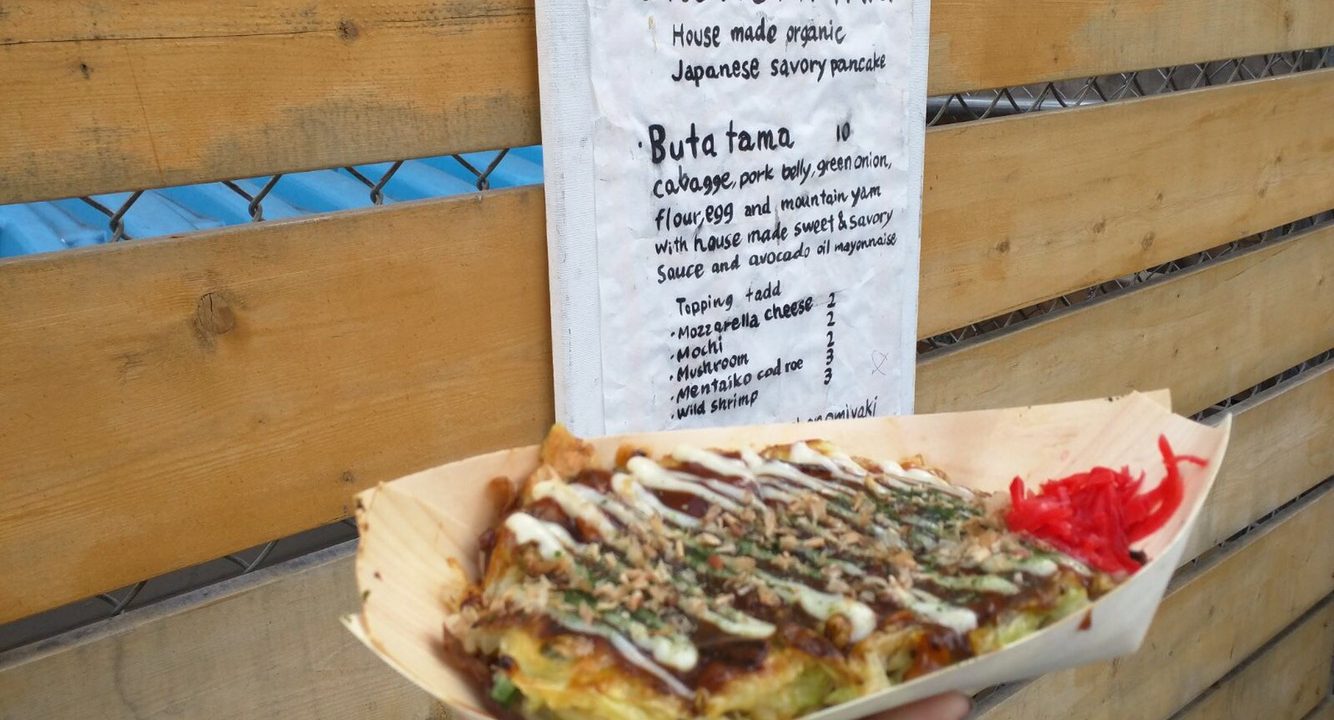 Okonomi Yaki: Popping Up in Temescal

Last month, I went to check out Temescal Brewing on Telegraph Avenue in Oakland. I can’t say that I was there for the beer; I was there to try “okonomi yaki,” a popular street food from Japan. I met up with a group of friends at Temescal Brewery for the Okkon pop-up. Every other Wednesday, Satoshi and Sochi Kamimae sets up a table and a grill in the Temescal Brewing beer garden to make the Japanese specialty.

“Okonomi yaki” is described as a Japanese pancake. I was excited to try it for the first time. I had never even heard of it before. I placed my order for the “buta tama” which is the classic “okonomi yaki” with pork. Additional toppings of mochi, mentaiko roe, wild shrimp, and mushrooms could be added. I added mochi to mine.

It is a pretty interesting scene to watch Chef Satoshi make the pancakes. I watched as he made them individually with love and care. Chef Satoshi would toss shredded yam, cabbage, tempura bits and green onions in a bowl and combine it together with an egg and flour batter. After a thorough mix, he would then slowly pour the mixture onto a heated grill. On top of the mixture, he would add two thin strips of pork belly. Once cooked part way through, Chef Satoshi would turn over the golden brown pancake to cook the other side.

I think the pancake gets turned a number of times and a lid is placed on it to ensure it cooks thoroughly and evenly. It’s not a quick cook, so its genius to set up this pop-up in a beer garden where you can enjoy a nice cold beer and have a place to sit while you wait.

Since we ordered separately, my friends and I just shared them as our orders came out. The “okonomi yaki” were dressed with a sweet and savory sauce and an avocado oil mayonnaise. They were fantastic. I enjoyed the exterior, especially what was brought out by the crispy pork belly. The vegetables were abundant, fresh, and delicious. I would describe the “okonomi yaki” more as a crispy omelette rather than a pancake. The additional topping of shrimp on one and the chewy texture of mochi on another were great.  They were excellent to wash down with beer as well.

Most people that come to Temescal Brewing are here for the local craft beer. I’m not like most people. I am one who definitely needs good food to enjoy a good beer. I am lucky to have had both in one place. Temescal Brewing has a nice selection of homemade brews on tap. Their website currently list nine varieties. I enjoyed one of the lighter beers. Temescal Brewing celebrated their one year anniversary last month. Congratulations and best wishes for many more years to come and many more “okonomi yaki”!

The Apple of My Eye: Addie's Pizza Pie