I am at Sea-Tac Airport waiting for my flight home. Seattle is becoming one of my favorite Cities to visit. It is a lush and beautiful place with great food all around. I didn’t think I wanted to write another Seattle based food blog before I arrived, but I enjoyed some new things I wanted to share.

All three items I am writing about are local, homemade, and can be found at Pike Place Market. A small Latin grocer called El Mercado Latino sells mostly imported products, but they also sell homemade empanadas and chicharrones. It was the sign for hot ‘n crunchy chicharrones that caught my eye. 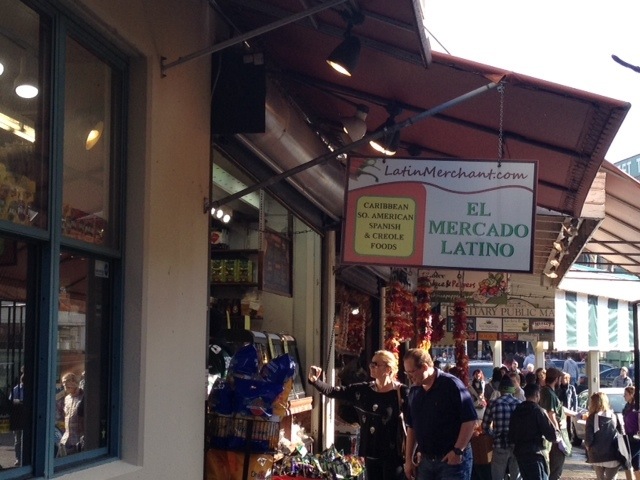 No one had to twist my arm to purchase a bag of salted chicharrones. I left the store snacking on the chicharrones on Post Alley. What was in this bag had all the features I look for in chicharrones-crispiness, lightness, and the perfect amount of salt. They were the best chicharrones I have ever had.

I immediately went back to the grocer to get the other flavor, chili lime. The flavor was also very good, but I think the regular salted one was better. In this instance, regular is better. Next time I think I will have to try the empanadas.

RGB stands for Rachel’s Ginger Beer. I love ginger beer and to find a shop that brews their own ginger beer in various favors must be tried in my book. My friend and I got samples of the white peach and the blood orange. I asked the guy at the counter what his favorite flavor was and he replied white peach. I liked it more than the blood orange, so I got a cup of white peach flavored ginger beer.

I admit that RGB is not spicy like other ginger beers I am used to enjoying. It’s more like a refreshing spritzer with a hint of ginger flavor. I could also get a real beer (with alcohol) for $5 almost anywhere, but I don’t know where else I can get a homemade flavored ginger beer at any price. RGB is more for the experience and on a nice day in Seattle, it could hit the spot.

My third and last pick is my favorite new discovery. I say it’s my favorite because I was completely surprised by it. My friend was telling me about wanting to get Greek yogurt at a place called Ellenos at Pike’s Place. Seriously? With all the great food in Seattle, she wanted Greek yogurt? I am not even a fan of Greek yogurt.

I did not plan to purchase any Ellenos Greek yogurt, except they sold me when they gave me a sample in front of their store. It was deliciously creamy with a lot of sweet and a slight hint of tang. They have a variety of toppings, but the mixed berry compote completed it for me. It was so good, that I had it for breakfast yesterday, and I bought one in a mason jar to bring home.