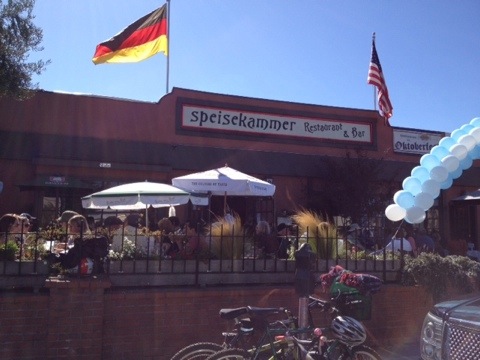 I have been changing up my walking patterns lately and last Sunday hit Alameda beach. For an early dinner I thought it would be nice to go to Speisekammer Restaurant and Bar since we were in the neighborhood. My friend had never been to Speisekammer and it’s been awhile since my last visit.

Speisekammer was packed and appeared festive with balloons and even a few ladies dressed in bar maid costumes. Duh! It was an Octoberfest celebration. Awesome!

There was a limited menu for the celebration. I was disappointed that the potato pancakes were not available. This is something I usually order when I am there. It’s really tasty and comes with a delicious homemade apple sauce.

I love smoked meats and decided on the smoked pork chops. My friend ordered the beef stew over spaetzle. We decided we would share.

You can’t go to Speisekammer without having a drink. I ordered my usual Framboise, or raspberry flavored beer. It was nice and refreshing for this warm evening. 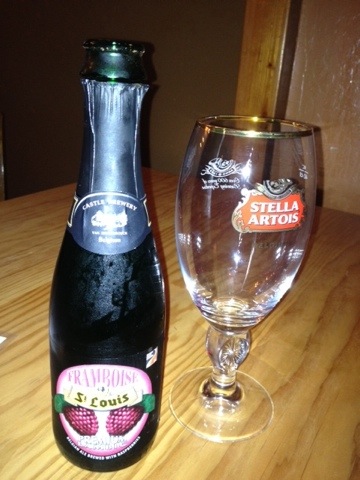 Our waitress brought me something that was not my pork chop. She mistakenly thought I ordered the smoked pork shank. Since it was still a smoked meat, I told her I would take it. It actually looked really good. The pork shank came with mashed potatoes and my meal was really tasty.

I explained to my friend that spaetzle is a German pasta. I have a friend who occasionally makes spaetzle and I have had the pleasure of watching it being made. It’s a thin liquid dough that cooks into boiling water that creates a soft noodle. I had no doubt that her beef stew over spaetzle would be good and it was.

Speisekammer is continuing to celebrate Octoberfest each Sunday through October 14. If you don’t make it next Sunday, don’t despair because Speisekammer is a great place to hang any time of year and have German comfort food.