Lucky for Me, It’s Crab Season

Friday marked the official opening of Dungeness crab season in the Bay Area. I am very excited because I want to continue to cook my own crab. I steamed a live 2 pound Dungeness crab for the very first time about two weeks ago. At that time, it was probably the largest crab in the tank of Lucky Seafood Market in East Oakland. I think its called Lucky Seafood because its located on the corner of 12th Avenue and 12th Street.

When I got home, the crab was still alive. I rinsed it a bit before putting it shell down into the largest pot that I had transformed into a steamer. I was a bit nervous that it would not fit, especially the legs and claws. I really had to use the lid of the pot and a pair of tongs to make sure my crab was covered completely and that I would not get clawed. Whew, it fit, but barely. The crab would now suffer a quick and painless death. 🙂

I put the timer on while I made a sauce for it. Some people like melted butter, but I love crab with a simple soy chili oil. To make this, you would finely chop two or three Thai Chili Peppers and place in a small bowl. Serrano or Jalapeño will work as well. Pour a quarter cup of soy sauce over the peppers. In a small saucepan, heat about two tablespoons of vegetable oil over high heat. When it gets hot in about two or three minutes, pour over the chili and soy. So simple, yet so good.

After about twelve minutes, I turned off the heat and pulled the crab out and placed it in a bowl so I could dissect the crab. I first removed the top shell. I was told that the gills are not edible so I discarded that next. That left me with the body and legs which I easily broke apart using my bare two hands. Although this was my first time making crab, I have a ton of experience eating it. The meat was soft and very sweet. It was delicious. I was quite proud of my achievement. 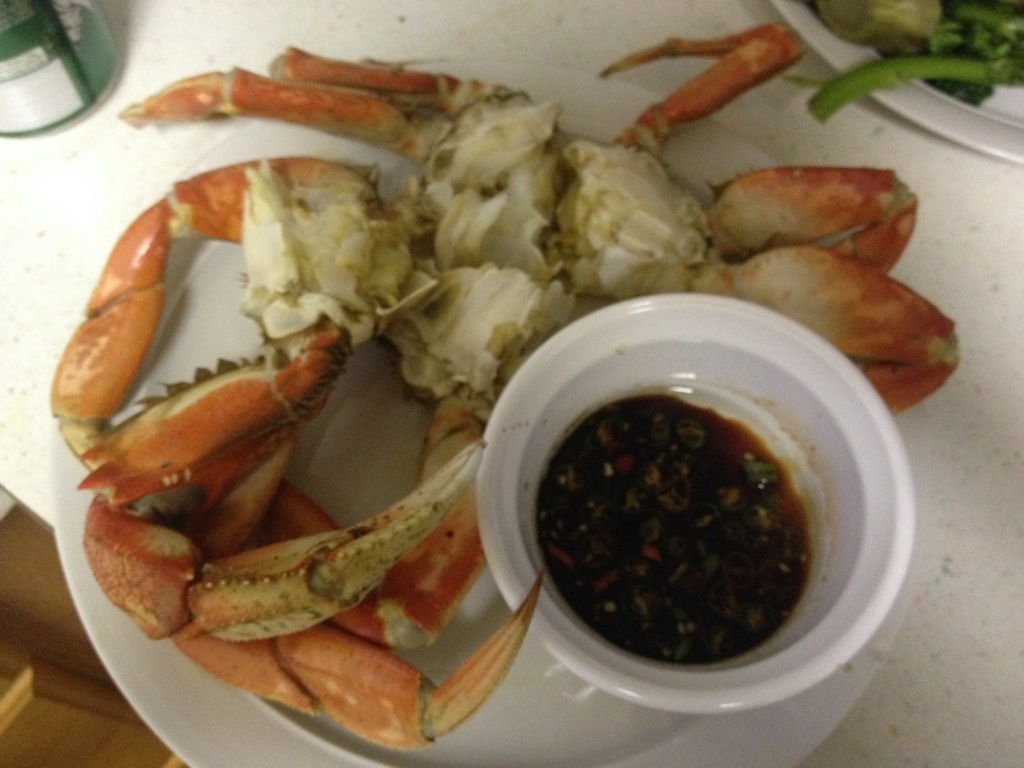 Did I say how excited I am that it’s crab season? Lucky Seafood Market has plenty of other fresh fish if crab is not your thing.