I ran my first half marathon exactly one week ago. I participated in the Rock ‘n Roll Marathon San Diego with two friends whom I went to college with at San Diego State University over twenty years ago. It felt gratifying to be able to complete 13.1 miles in under two and a half hours. I trained for ten weeks, increasing my distance every two weeks.

I enjoyed running through the various neighborhoods of San Diego, being cheered on by strangers, military folk, and high school cheerleaders, and being met at the finish line by friends. I felt a great accomplishment that deserved a celebration meal.

I made reservations for dinner at Juniper & Ivy (J & I), a Richard Blais restaurant. Chef Blais is well known from the TV show Top Chef and introducing the mainstream to molecular gastronomy. I walked into the restaurant proudly wearing the three medals I received. I obtained the first medal from running the 5K on Saturday, a second medal from running the half marathon on Sunday, and a third medal for running both. The staff at J & I brought each of us a free glass of champagne. It was such a nice gesture and definitely made me feel special.

One of my friends pulled a nice bottle of wine from her “cellar” at home and packed it into her suitcase so we could enjoy it after the race. The vintage 2007 Le Chanceux Napa Valley Cabernet Sauvignon was delicious and a nice treat.

J & I’s menu is categorized by snacks, raw, pasta, toast, small plates, and plates. There were four of us and we decided to share a variety of items. I have never had a deviled egg like the ones at J & I. The filling of yolk mousse and mustard seed caviar are piped into a meringue shaped to look like egg white. It was a super cool concept, but I personally prefer my egg whites boiled instead of whipped.

My tablemates enjoyed the foie gras cookies as I declined to eat them for principle’s sake. I haven’t had foie gras since the California ban in 2012. Although the law is in appeal, I have decided to give it up. However, I was informed that the cookies were amazing.

The green beans were tempura fried and complimented with a ramp ranch dip. This was pretty boring, but the only reason we ordered it was to substitute the littleneck clams that had run out.

The pea “socal fredo” was a pea linguini with charred shrimp and soft boiled egg. As it was being tossed, I could already envision the luxuriousness of this dish I would soon enjoy.

The burrata was accompanied by golden tomatoes, Persian cucumber, and croutons. This was light and refreshing.

We ordered the stone crab toast which was like an open faced crab sandwich that came with beefsteak tomatoes and avocado. Even after cutting the toast into fours, I felt I was getting a significant amount of fresh and flavorful crab.

The chicken liver came with cherry pecan bread, pickled cherries, and candied pecans. I thought it was overly sweet and the bread was too dense.

Another beautifully presented dish was the Spanish octopus. It came with black eggplant purée, shishito peppers, fennel, and green chickpeas. It was one of my favorites.

I put in the order for the New York Strip. It was prepared with confit Alaskan potatoes, marinated tomatoes, blue cheese butter, and chimichurri. It was perfect for sharing four ways as it was a large plate.

We shared two desserts. We had the “banana cream” which had caramelized pineapple, vanilla wafers and banana curd and the “almond joy” which was made with soft chocolate, marcona almonds, coconut sorbet, and pavlova. Both desserts were awesome and a perfect way to end the special meal.

Although I didn’t think everything we ordered was perfect, it was the exact way to enjoy a shared meal with friends. Dinner at Juniper & Ivy was a fun and enjoyable experience.

A Day in Sacramento: Big On Japan 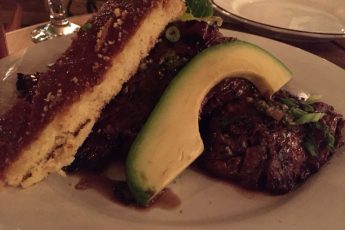