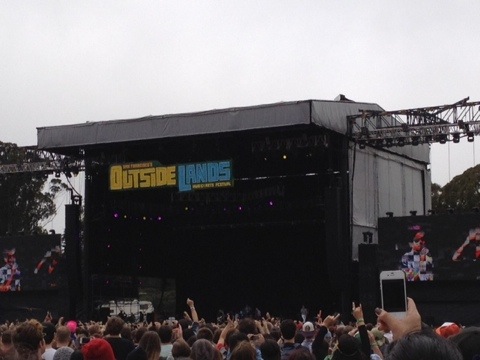 Last week was Outside Lands at Golden Gate Park in San Francisco. Outside Lands is a three day Music and Art Festival. For short I will refer to it as OSL. The event was in its fifth year and it was my first time. For the most part, I tend to avoid crowds of 60,000. I was lucky to have a friend who hooked me up with an all access pass.

There were over one hundred acts (music and comedy) playing on six stages at OSL. Although I love music, I knew more food vendors than musical acts. I had a great time listening to music, but I was very impressed by the organization of the food vendors. I couldn’t believe Golden Gate Park united about 75 food carts, trucks, and stations. That’s not counting the wine and beer. On my first day there, I spent a lot of time scoping out the food vendors. 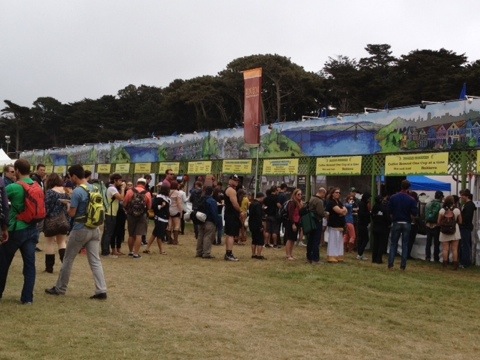 The main stage was located at Polo Fields and restaurants throughout the Bay Area had food stalls on the right and left of the stage. After a lot of debate including whether I should have fried chicken and waffles from Little Skillet, I decided to give Homeroom a try. I’ve heard about this restaurant serving up mac & cheese in the Temescal neighborhood in Oakland, but haven’t had a chance to try it out. They were serving up Gilroy garlic mac & cheese. It had a subtle amount of garlic with rich creamy cheesy flavors. I enjoyed it and it was perfect on this cold summer day in San Francisco. Now I have to remember when I am in the mood for mac & cheese, there is a place close by called Homeroom that can make it perfectly. 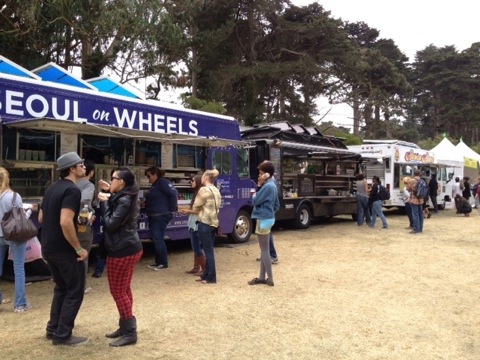 There were additional sections of the park that had food and drinks paving the way to other music stages, a few of them with food trucks. You could get items such as tacos, pizzas, cupcakes, or even fried green tomatoes. I tasted one of my friend’s fried green tomatoes from Those Fabulous Frickle Brothers and they were really good. The wood fired oven pizza offered by Del Popolo were one of the most popular food trucks on site. They have the most beautiful food truck and the pizzas coming out looked amazing. Their twitter feed indicated they planned on serving 1,000 pizzas for each of the 3 days. 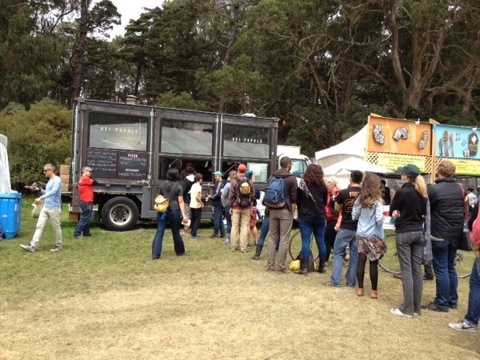 Chef Michael Minna was representing as well. He sponsored an area called Outside Lambs. Pop-ups selling lamb poutine and gyros were available. The name is cute, but pork or cattle would be a little more up my alley. 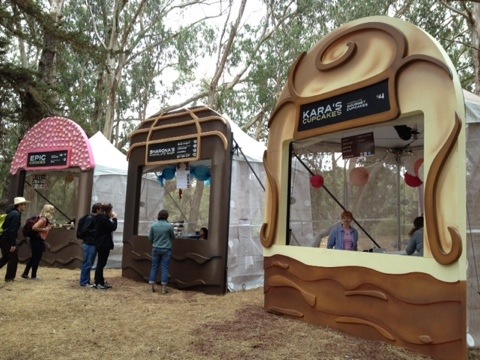 Choco Lands was a cutely decorated section in the park where you could find sweets. Among some of the treats were cupcakes, cookies, popcorn, and chocolate bars. I got a bag of chocolate covered caramel corn from the vendor Delessio. It was such a large bag that I put it in a ziplock and I’m still enjoying it. I got mine with peanuts and when I’m eating it, I feel like I am having fancy Cracker Jacks. 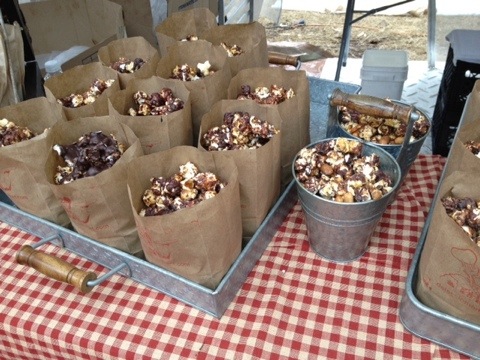 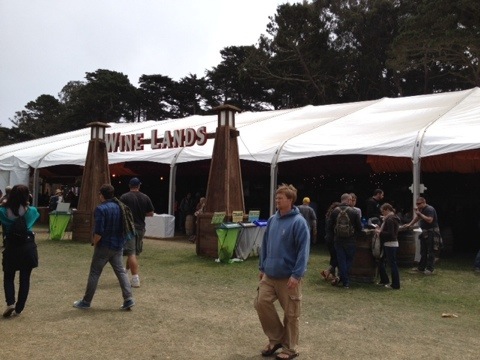 There was also Wine Lands and Beer Lands. Food was definitely highlighted at OSL and not only did they have something for everyone, they had enough for everyone.

“Outside Lands featured an expanded palette of food and beverage options that made eating and drinking at the festival just as much fun as listening and dancing.” – Rolling Stone