The opening of Parlour has been a long anticipated wait for me.  It’s located in Uptown Oakland a block and a half from where I work.  Imagine the suspense of knowing a new restaurant is going to open up in your neighborhood and they are remodeling the space.  The entire front entry is made of glass and wood from top to bottom.  For well over a year, those windows were covered with paper and I was intrigued about what was going on in there.

Parlour finally opened on March 25.  I tried to walk in two days after the opening and couldn’t get in earlier than 9:45pm.  The restaurant pretty much encourages reservations.  Now that I know you can make reservations on Open Table, it works for me.  I made an early and same day reservation last week for me and two friends.
We started with cocktails, after all it was really 6pm our time!  I had a drink called a Foxtail which is made up of rye, lemon, pomegranate molasses, and mint.  It was delicious.

Our first starter was purple asparagus with pancetta, farm egg, sherry gastrique, and parmesan.  My friends were wondering why the asparagus was green.  I thought maybe if you cooked the purple asparagus, it would turn green. We asked the waitress and she told us that they actually ran out of purple asparagus.  We still enjoyed these tremendously.  Each ingredient was cooked beautifully and complimented each other.

We also ordered the meatball appetizer which is made of pork, veal, and beef.  The tender flavorful protein was outstanding.  They came with some crostini which I was happily dipping into the sauce.

What came out next was a plate that was compliments of the chef.  It was the vitelli tonnato which is pastrami tongue, crispy capers, celery hearts, and tuna aioli.  It was definitely not something I would order.  It was actually pretty tasty, but something I didn’t have to have.  We think the chef brought it to us because of the asparagus incident.  The purple asparagus appetizer did have a $15 price tag on it which I thought was pretty outrageous.

Funny thing about purple asparagus is that I saw it at the Farmer’s Market yesterday and it is pretty pricey. I did some further research and learned that purple asparagus tends to lose its color after cooking and can turn green.

Parlour has a wood fired oven so we ordered a couple of pizzas.  The first one was a pepperoni and castelvetrano olives.  These are my favorite olives and I think it’s genius to out them on this particular pizza.  The pepperoni was cooked crispy just like I like them.  Yum and it looked like Christmas. 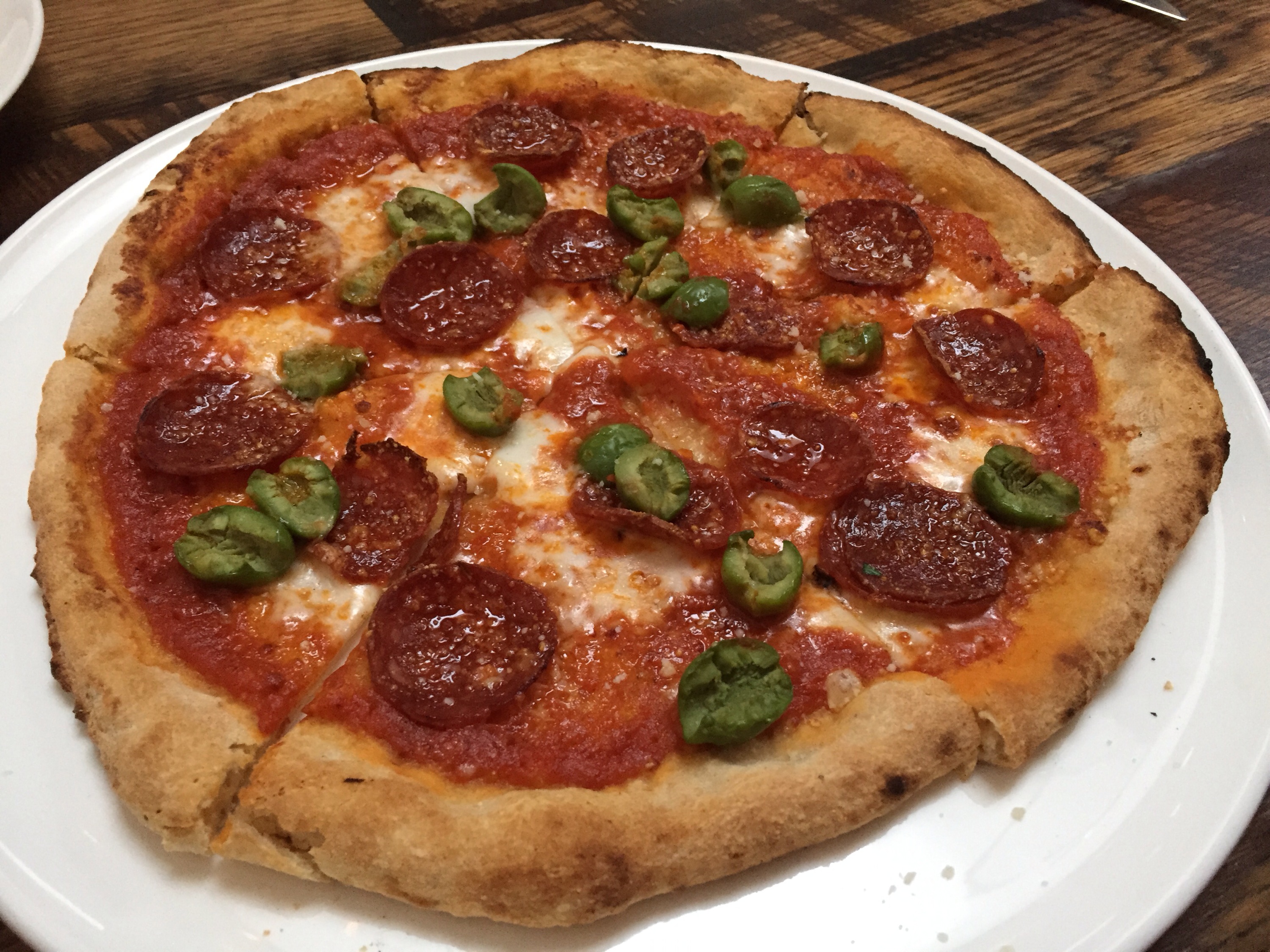 The other pizza was the basic margherita pizza.  It was good but it was slightly unbalanced as far as the mozarella is concerned.  The crust on the pizzas were more on the crispy side.

I was with some big eaters so we also ordered the duck egg chitarra.  Chitarra is a pasta similar to a spaghetti.  This pasta came with cured kumquat, slow cooked duck ragout, and pecorino.  I was getting quite full so just had a small amount.   The flavors and textures were excellent.

There is always room for dessert.  I picked the olive oil cake with blackberry preserves and vanilla chantilly cream.  The cake had a springy texture different from other olive oil cakes I’ve eaten.  I thought the blend of slightly tart preserves and creamy sweetness added to the cake was delicious.

The other dessert we had was the smoked pear crostata with a brown butter caramel and a bay leaf semifreddo.  The operative word is smoked.  I couldn’t get passed the smokey flavor.  It was eaten up so I figure someone enjoyed it.  It was definitely interesting and probably innovative. 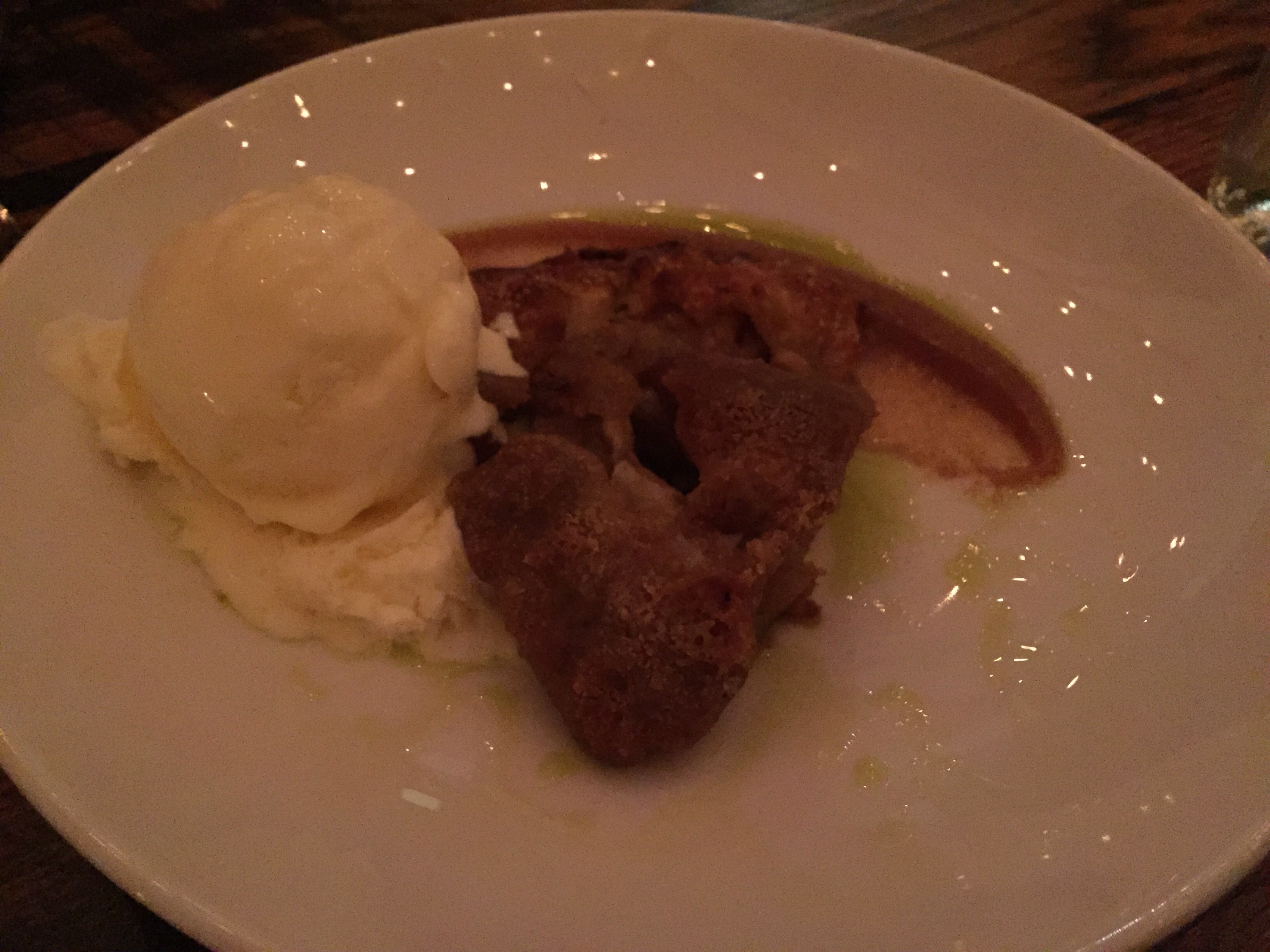 Overall, Parlour is great!  I guess I can say it was worth the long wait it took to open.  Right now they serve dinner only, but I heard they will be opening for lunch in a few weeks.  Being so close to work, I’ll be back.  Remember to make your reservation at Open Table.

King of Kebabs: The Kebabery

A16 in Rockridge Rocks