The Las Vegas Buffet: Did I Get My Monies Worth?

I am not a big fan of buffets. Most buffets serve average food and buffet goers hope to eat more than their monies worth.

In Las Vegas, buffets are pretty popular at every hotel. It seems there is always one that shines each decade. In the 1990’s, it was the Rio’s Carnival World Buffet and in the 2000’s, it was the Buffet at the Bellagio. Two weeks ago, Caesar’s Palace opened Bacchanal. It was a $17 million renovation. I was in Vegas last week and I was eager to see what this was all about.

Bacchanal is open for breakfast, lunch, and dinner. My friend and I opted for dinner. We both seemed to be on the same page wanting to do tastings so that we could try as much as possible. Our strategy was to arrive early, pace ourselves, and share some items. The restaurant was very sleek and inviting.

There was a good variety of Asian cuisine, but some unique items included xiao long bao aka xlb (dumpling filled with soup) as part of their dim sum collection and made to order noodle bowls. I did try the xlb but thought the skin was a bit dried out by the heat warmers. The ramen bowl was really good. The broth was flavorful and the noodles had great texture.

The Italian section was full of small plates of salads like Caesar and watermelon and feta. There were pizzas that were coming out of their wood fired oven. There was plenty of pastas, lasagna, and anti pasta. The watermelon salad was plated like a checkerboard and was one of my friend’s favorites. We both agreed that the pizza was not good.

There was a Mexican area filled with carnitas, beans, and a variety of salsas. I only wanted to try a hand made tortilla. Although there was a stack under the heat warmer, I asked the woman making them if I could have a hot one off the grill. Of course I could and it was good.

The American food at Bacchanal was expansive. You could get stuff like sliders, fried chicken, and fish and chips. We didn’t try any of those items. There were fried sides like onion rings and sweet potato tater tots that were placed in mini metal baskets. I was surprised by how much I enjoyed the sweet potato tater tots, not just the concept. The mashed potatoes were probably some of the best I have ever had, so yummy and creamy. 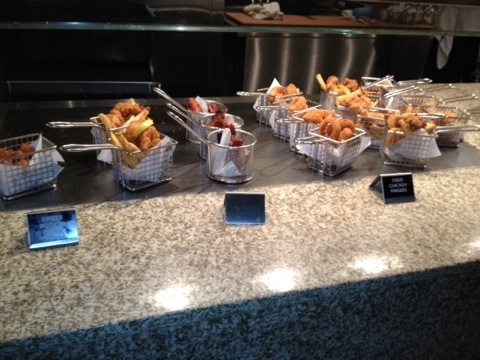 The carving station was serving various meats. I went back three times to get another lamb chop. This was my favorite thing. They are individually grilled and charred to a perfect medium rare. The flavor was amazing with a hint of honey.

Seafood is always popular at buffets and this one had crab, oysters, and shrimp. I noticed that many people pile on crab legs and shrimp cocktail onto their plates. This is where you know people are trying to get their monies worth. I had a couple of crab legs just to try them, but they were quite boring.

The last thirty minutes at Bacchanal was dedicated to their fine dessert section. Every dessert was a miniature one, except for the made to order crepes. I would skip the crepe, but try a few other things. I was speaking to one of the pastry chefs who offered me a banana soufflé hot out of the oven when I was ready. I was ready and she recommended that I have it with the baklava gelato. It was pretty awesome. The other flavor gelato that I went back for was the strawberry mint. It was refreshing and a great palette cleanser to finish off my meal.

Did I get my monies worth? If you calculate by quantity, maybe not. But I definitely got my monies worth when you think of the variety and quality of food that I ate. I think Bacchanal will be the new buffet of this decade.