The East Bay community is saying goodbye to Hawker Fare in Uptown Oakland, which closed its doors last night after almost six years. Hawker Fare is Chef James Syhabout’s Southeast Asian street food focused restaurant. I was able to dine at Hawker Fare on one of its final nights last week with a friend and her daughter.

One of the favorite dishes of the evening was the fried chicken. Similar to Japanese chicken karaage, these crispy nuggets of chicken thighs were well marinated, breaded, and deep fried to a golden perfection. It was served with a chili jam and went especially well with sticky rice. It was a hit for my friend’s daughter as well.

In the last several years I have been obsessed with the Laotian dish, Nam Khao, fried rice ball salad. I have been in search of the best fried rice ball salad in Oakland. I just love the mix of savory, tart, and spicy flavors and then the awesome crunch you get with this dish. Unfortunately, the fried rice ball salad at Hawker Fare fell flat for me. One huge factor was likely that it didn’t include pork meat. I also felt that the texture was chunkier than I have had at other neighborhood Laotian restaurants.

Similar to how I must order fried rice ball salad, my friend must order the Laotian style papaya salad. Some might call it umami and others might call it funky because of the flavors of fermented fish and crab that are very prominent. In general, this dish was fine, but my friend thought it was too saucy.

We also shared the mussels steamed in coconut milk. The fresh mussels from Washington are cooked in a coconut broth made with unique spices including fresh galangal, Makrut lime leaves, lemongrass, and fish sauce. The broth was so good, I envision dreams about it.

We ended the evening with condensed milk soft serve. I’m really gonna miss their soft serve machine. It was always a refreshing way to end a meal here.

The closing of Hawker Fare is sad for me, but likely bittersweet for Chef Syhabout. I still remember how cool it was that he opened up the restaurant in the exact location of the Thai restaurant his mother once opened. The saving grace is that there still remains a Hawker Fare, but you’ll have to cross the Bay Bridge to get there. He opened up a second Hawker Fare in San Francisco about two years ago. 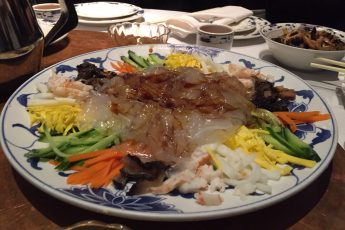 Great China: Celebrating the End of a Year

UC Berkeley: Changing the way I think about Cafeteria Food